Well what do you know, the sun came out!  After being forecast a doom laden weekend of cold and rain, it has actually been one of the most pleasant weekends we’ve had for a long while.  So, as the unexpected sunshine warmed our back garden, my mind turned to making some iced lollies for consumption on later hot days.  Yes it is wildly optimistic but there you go.

I also had some mushy strawberries that needed to be used and were just begging to be teamed up with the fresh apple juice bought at the famer’s market this morning.  I hate throwing food out (that’s a whole other post) so the Apple Strawberry Lolly was born.  The stages were as follows:

Enlist 4 years old boy to push through seive (I happened to have one on hand),

Pour into jug and then into lolly mould for freezing, 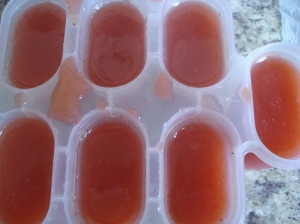 Voila!  Yummy lolly’s ready for sticks.  I freeze them for about 40 mins first so that the sticks stand up.  Don’t they look good enough to eat?

The final and most vital phase involves removal of any leftover juice by whatever means you have at your disposal.  I have specialised eqipment designed for just this sort of eventuality.